When the going got tough, ACCELERATE Special Gasoline brand ambassador Giordano Lupini got tougher! Power Series Round 5 proved gritty and challenging for the young racer, who had to put his driving skills to the test. Find out how he performed… 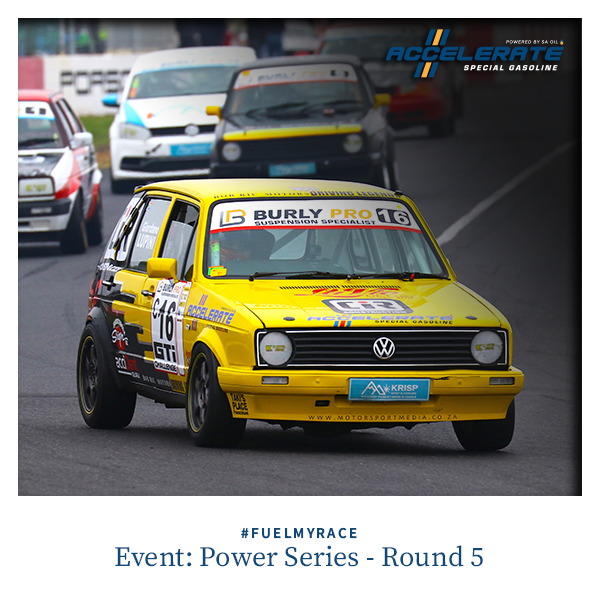 A Smooth Race Never Made a Skilful Racer

“That was quite a weekend!” young racer Giordano Lupini admits – though his racing season has had its challenges, this weekend’s racing tested Giordano’s mettle and his skills as a racer. With a target on his back for most of this season, his competitors fought tooth and nail to take the lead from him at the Wingfield Motors’-sponsored Power Series Round 5 at Killarney Raceway, Cape Town.

As championship leader, Giordano anticipated a difficult weekend of racing. Brett Roach proved again that he is a competitor not to be taken lightly as he gave Giordano a run for his money in race one. Despite being able to pass Roach and obtain pole position, Giordano lost the win to foul overtaking within the yellow zone, putting Roach in the lead. Race two proved more successful and Giordano hit the track running, determined to make up for the points he lost in the first race, securing a win and ending the day only 20 seconds behind Class C winner Brett Roach, despite the 30 second penalty the yellow flag earned him. Overall, the ACCELERATE Special Gasoline-fuelled racer managed to keep his championship lead and proved that it’s tough races like these that fashion the most successful and skilled racers!

ACCELERATE Special Gasoline is a pure racing fuel developed to boost performance, and does not contain lead, oxygen or ethanol. It is specially formulated for high-performance engines – and their high-performance drivers! Learn more about the fuel of champions…