The G-20 Summit held in Japan in June 2019 provided the first flicker of hope for the end of the US-China Trade War. However, recent backpedalling by both parties may see the war continue, and will continue to wreak havoc on the agriculture industry… 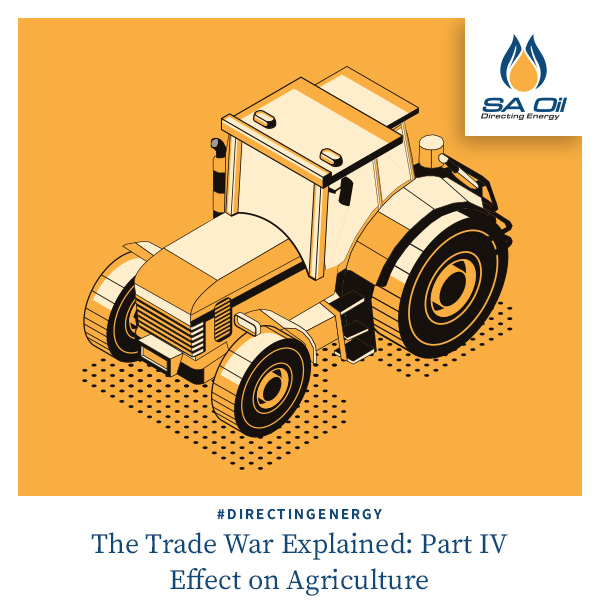 No Hope Yet Despite Reignited Trade Talks

The Trade War has lasted for well over a year, despite ever-growing global concern over the impact the political conflict is having on economies and industries around the world. When US President Donald Trump agreed to meet with Chinese President Xi Jinping during the G-20 Summit held in Osaka, many had hopes that trade talks which had broken down last year would continue – and they did. Despite this seemingly pleasant reconnection of the two leaders, trade tensions have once again flared up barely a month after the Summit, and the situation appears to continue to sour.

The ceasefire between the two nations sits atop unsteady ground. Just last week, Beijing stated that it would impose sanctions on US companies selling arms to Taiwan. In addition to this blow, the US was blindsided by the World Trade Organisation (WTO) which has lambasted some US tariffs on Chinese goods, stating that these tariffs do not comply with its rules. Trump’s response to these developments was that the threat of implementing a further $325b on imported Chinese goods remains, and that he is in “no hurry” to resolve the trade issue with China. China’s decision comes at a cost, as well – the country’s government statistics agency recently announced that the country’s GDP growth for the first half of 2019 was the lowest since 1992 when the country was recovering from the Tiananmen Square massacre. However, China is definitely not the only one suffering the consequences of the ongoing Trade War.

Agriculture Suffers During the Trade War

Agriculture is arguably the cornerstone of society: almost every country’s economy depends on the industry in some way or another – from feeding the masses and exporting food goods, to providing jobs and contributing to GDP, the farming is irreplaceable. Like other industries – mining, manufacturing, oil – agriculture has not been able to escape the effects of the Trade War.

American agriculture has felt the sting keenly with the impact of the Trade War compounding almost half a decade of declining commodity prices and losses. Soybean farming has suffered exponentially, seeing the lowest prices in more than a decade. Added to this is China’s tariffs on imported American soybeans which sits at a painful 25%. The Chinese have since then turned to other countries for their soybeans, such as Mexico. The nation has also recently added tariffs on American apples, oranges, pork and almonds. American farmers are facing financial crisis – Chinese consumers once made up about 60% of their market, but many states are experiencing drops in demand for their exported produce. Exports have dropped so severely that many older farmers are retiring early to protect their equity, while younger farmers are pulling out of the industry and pursuing other careers.

China’s situation is quite different in this regard. A key factor in agricultural trade is comparative advantage – the ability of a country to produce a product at a lower cost than that of a trade partner. This is largely why China purchases so much agricultural produce from America. In addition to this, China has considerably less arable land (land on which agricultural farming can take place) than America – only 7% of the world’s arable land, versus America’s 15%, but with more than double of the total population to feed. US soil is often better than the planting soil available in China, as well. Harsh restrictions on genetically modified crops like corn and soybean result in only 50-60% of the total yield of average yields seen in Iowa.

A long-standing dispute between the American government and South African poultry farmers has worsened since the onset of the Trade War. Washington has historically restricted South African poultry imports due to health and sanitation concerns, while SA has been charging the US for chicken imports that came in at below cost, and for high tariffs. 2015 Saw the two countries reach an agreement: South Africa would exclude 65,000 tonnes of US poultry imports from anti-dumping tariffs, and in return the US would allow for duty-free trade access that also benefitted other South African Industries.

Calls were made for the end of this agreement when Donald Trump excluded South Africa from a list of countries exempt from tariffs his administration imposed on steel and aluminium. According to South African farmers, this goes against the African Growth and Opportunity Act (AGOA). They are demanding that the 2015 poultry deal be nullified and that the previous tariffs imposed on US poultry imports be reinstated.

Apart from the poultry industry, South African fruit and wine exports may be benefitting from the Trade War. A 15% tariff imposed by China on US imports have increased the demand for these produce items from South African producers, and exports like citrus fruits, nuts, strawberries, and wines have grown enormously. However, this slight silver lining remains under the shadow of the larger, intensely negative side effects of this ongoing Trade War.

What the Farmers Have to Say

Although Trump rallied major support from rural areas in America, and thus found support within the farming community, they have been quick to voice their concerns and anger at the president’s decisions regarding the Trade War. Trump’s expression of concern over farm security in South African got him some support here; but poultry farmers in particular are unhappy with the current situation. Many have taken to the media to share their opinions…

Regardless of economic climate or the ongoing trade tensions, farming production does not come to a halt. Keep above the fray, and your farm or agricultural business fuelled – contact us for reliable fuel solutions.