A reprieve from the US-China Trade War may see cooled tensions and a start to global economic stability, but the truce may be too little, too late. Find out how the year-long trade struggle impacted the mining industry in South Africa and around the globe… 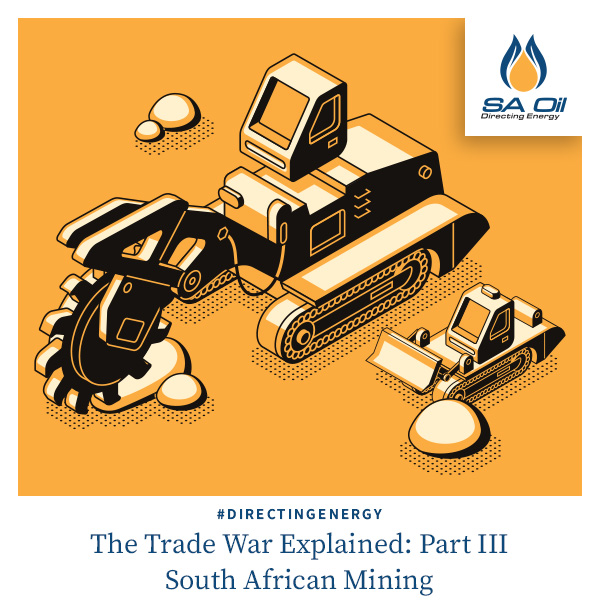 The G-20 Summit in Osaka late in June 2019 finally saw some reprieve for the year-long Trade War between the US and China, providing the world with the first glimmer of hope since the war began when trade talks broke down early in 2018. This ceasefire, or ‘truce’ as it’s been called, will see a halt in the additional tariffs Trump intended to impose on imported Chinese goods, as well as a lift on some of the restrictions between Huawei and US tech companies, amongst other things. The reprieve may have come too late, however, as the ripples of the Trade War have had a severe impact on major industries, including those in South Africa, such as manufacturing, oil and mining.

How the Mining Industry has Been Affected

The largest impact on mining has been felt in steel and aluminium trading, both of which received large tariffs from the US – 25% and 10% respectively. Both of these materials are exceptionally important and are used in construction, energy, transportation and more. Being such crucial resources, they are directly linked to growth at a global scale, meaning the tariffs imposed on them had have harsh repercussions for their relevant mining stocks.

Though neither steel nor aluminium are physically mined from the earth, their core components are. Steel is an alloy based primarily in iron, and iron ore is mined from reserves in the earth. Steel is formed from the ore using carbon and metallurgic coal, or coking coal, and an electric arc furnace. Aluminium is made from an ore known as bauxite, which is chemically processed to make alumina, or aluminium oxide, which is then smelted to produce pure aluminium metal. Thus, obtaining either of these metals is a lengthy and costly process, and the implementation of the tariffs imposed on China by the US had a major impact on the industry.

Apart from the high tariffs imposed on steel and aluminium, global commodity markets as a whole experienced price turbulence, with prices on copper, nickel, zinc and more reaching extreme lows. Both the US and China are major importers of metals, and the Trade War between the two countries put pressure on the sector in terms of production and prices.

South Africa’s mining sector has been experiencing a slump for quite some time, and 2019’s Q1 results showed no change with a -3.2% decline in GDP, largely owed to manufacturing, the Eskom crisis and the mining industry, which earned –10.8% in performance, largely thanks to a decrease in diamond, iron ore and coal production – a massive blow for the country with the fifth largest mining sector, in terms of its contribution to economic growth. In addition to the severe production cuts, the mining sector is cutting jobs, something with which the National Union of Mineworkers (NUM) have expressed their immense dissatisfaction.

China is a large importer of South African commodities, and the Trade War has cost both countries greatly, though most of the brunt is being borne by South Africa which has an emerging market vulnerable to economic events across the world. South African President Cyril Ramaphosa has ‘picked a side’ in the Trade War, however – with more than 10% of the country’s exports headed for China, as well as the enormous investments received from China last year, Ramaphosa’s keen to keep his counterpart Chinese President Xi Jinping as an ally.

Trump’s ban on Huawei and the restrictions he implemented for American companies doing business with the Chinese tech giant hit China where it hurts – Huawei relies heavily on US technology to provide processor chips for its phone models, meaning Trump’s ban and the consecutive ban that Google implemented shortly after has had resounding implications for the company. However, since the truce, Huawei will be able to purchase this technology from American companies once again, but the ban helped discover America’s own Achilles’ heel: rare earths.

What are rare earths? These important resources comprise a group of 17 chemically related elements found in mineral form within the earth. They have magnetic and optical properties that are useful when making electronics, electric vehicles, cancer drugs, LEDs and more.

Why are they called ‘rare’ earths? Though not quite as precious as gold or silver, these materials are commonly intermixed with other minerals, thus making their extraction and refinement a costly operation.

Where do rare earths come from? China and select areas of Southeast Asia dominate the rare earth market, in terms of both mining and processing. According to the US Geological Survey, China accounted for 71% of the rare earths mined and about 35% of global reserves are found in China.

How does this affect the US? America imports around 80% of its rare earth supply from China. At the start of the Trade War, US President Donald Trump intended to implement tariffs on the commodity, though he later exempted the materials from his list of goods receiving tariffs. This did not stop China, who included rare earths in some of its tariffs imposed on the US – at a rate of 25%. Given the fact that the US only has a single rare earths producer (that sells much of its ore to China anyway) this was definitely a strategic move on China’s part, as the country essentially weaponised an import crucial to American manufacturing. The commodity may just be China’s leverage if the Trade War should flare up again…

The Trade War may have cooled down for now, but experts say its small flame could reignite at any moment – especially given the general global climate we’ve experienced so far in 2019. Times like this call for reliability and certainty – two traits any mining company needs. As industry experts, we have fuelled mining across Africa. Contact us today for a unique fuel solution.