The manufacturing industry’s days of being a prized contributor to South Africa’s economy is on the wane – in just two decades, the sector’s contribution to GDP has shrunk from 18% in 1997 to 11% in 2018. But why the decline? Read more… 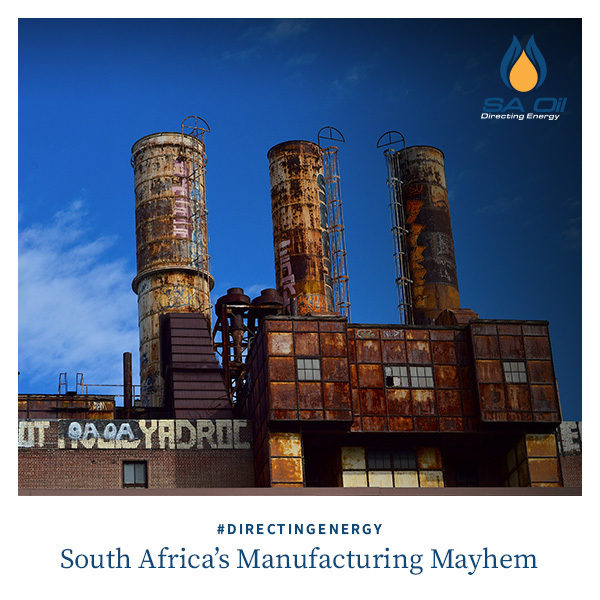 The Manufacturing Industry in South Africa

Crucially, in a country with well over 9 million unemployed, manufacturing employs 1.6 million people. According to the World Bank, it’s the industry with the highest job multiplier of any sector, reflecting a ratio of three jobs for every R1 million invested. As a multiplier sector, it not only creates jobs but generates export earnings and revenue and increases investment opportunities in the country.

The significant impact that the manufacturing industry’s poor performance has had on the economy also highlight the importance of resurrecting it. In the first quarter of 2019, the South African economy shrank by 3.2%, the largest decline in ten years. This shrinkage surpassed economists’ predictions, who expected the economy to contract by 1.6%. Manufacturing played a significant role in this regression at -8.8% output, although economists have also blamed severe malfeasance, corrupt activities, and Eskom’s load shedding.

Over a relatively short period of time, Eskom has become an enormous thorn in the side of the South African economy, swallowing huge amounts of taxpayer money and bottoming the country’s fiscus. In addition to this, the implementation of load shedding, first in the late 2000s and then again in late 2018 and early 2019, has had harsh implications for every sector, especially for manufacturing. Despite pleas from organisations like Sacci, who called on the parastatal to exclude them from the austere schedules announced by the utility provider, manufacturing companies were hit hard by the latest bout of rolling blackouts.

The periods without power have had devastating effects on the sector, further restricting its already limited contribution to GDP. Interrupted power supply means that entire production chains come to a jarring halt. To protect machinery, factories often stop production well before the designated load shedding slot begins, and only start up again long after the power has returned. This pause in production costs companies millions of Rands – missing deadlines, fulfilling orders late, and paying workers who aren’t working, amongst other factors. On top of these costs, Eskom tariffs have reached highs never before seen, meaning manufacturers are not only losing money due to down times but are also experiencing higher input costs. This will have expensive consequences for the sector for years to come, given Eskom’s tariff price increase plan for the next three years.

In addition to the dark situation in which Eskom has placed the industry, manufacturers must guard themselves against future power outages to avoid machinery damage, production suspensions, and further increased costs. One way of doing this is to get off the national power grid – in part or in entirety – to avoid relying on Eskom. Alternative energy options for power supply include:

Alternative energy solutions provide manufacturing companies with reliable power supply, avoid the risks posed by Eskom and keep facilities operational when others around them are, literally, powerless. Modular power plants and generators, for example, are easily installed and may not disrupt production in the process. The modular plants also operate with HFO, a fuel offering cost-effective, low maintenance use benefits. A number of other industries are using alternative power supply options like these, including the mining industry, agricultural farms and even hospitals.

Other Challenges Posed to the Manufacturing Sector

Besides the production and cost issues posed by Eskom’s unreliable power supply, the manufacturing sector is facing a number of other issues that are contributing to its contraction:

While South Africa may be losing its position as the continent’s economic powerhouse, some other African countries, like Nigeria and Ghana are experiencing growth. Generally speaking, much of the continent’s goods are imported for use, which limits the potential good a larger manufacturing industry could bring to African countries in the form of job and skilled workforce creation, a boost in the economy, and better social stability. Many African governments have acknowledged these benefits and opportunities, and work is being done through the African Union’s Action Plan for the Accelerated Industrial Development of Africa (AIDA) and the United Nations’ Third Industrial Development Decade for Africa (IDDA3) to grow the sector.

But while the African continent has enormous potential for economic transformation by growing its manufacturing sector, a recent report suggests that compared to other developing countries outside Africa – for example, those in the East – overall costs associated with manufacturing are more expensive in Africa. To be more competitive, African countries need to take stock of high labour costs, and invest in infrastructure, particularly a stable power supply.

SA Oil provides fuel solutions for manufacturing facilities across Sub-Saharan Africa, with core products to this industry being diesel, kerosene and heavy fuel oil (HFO). Speak to us for advice on these industrial fuel products, or how to make the switch from on-the-grid to off-the-grid manufacturing scenarios.