Located between Iran and Saudi Arabia, the Strait of Hormuz has recently been a site of ongoing, escalating conflict between Iran, the US and the UK. As an international energy chokepoint, the Strait’s importance cannot be understated, but political tensions pose a huge threat… 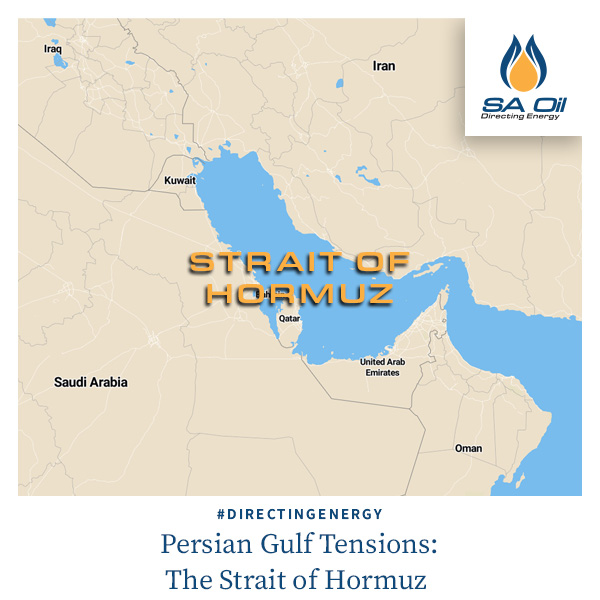 Dire Straits for the Persian Gulf

The Middle Eastern channel has historically been a location for political tension and, in the past, outright war – and recent events have seen it become a battle front once more. In the last few weeks, Iran has lashed out at both the US and the UK over sanction conflicts. The situation has become so tense that, at one point, both the US and Iran were threatening war. The conflict has caused implications at a global scale given the Strait’s importance for international trade – namely for the exportation of oil. 20% Of the world’s oil supply flows through the Strait. Its geopolitical significance makes it the perfect place for political and military manipulation.

Complications in the Strait first arose in June 2019 when two oil tankers were damaged in an alleged attack. The US accused Iran, but Tehran denied the allegations as well as any involvement in the tanker attacks that followed. Later that month, Iran shot down a US Navy drone, stating that the drone was flying over Iranian airspace. The US denied this, asserting that their drone was flying in international airspace. This incident incited a wave of tension between the two nations, both of which declared their readiness for war. However, the political unrest between the two countries precedes recent events in the Strait of Hormuz – it began in mid-2018 when the Trump administration left the Iran nuclear deal in May and made worse by US sanctions imposed on Iranian oil exports.

Apart from America, Iran has recently picked a fight with another big fish – Britain. Though not unwarranted, the rising tension between Iran and the UK serves only to worsen the overall situation occurring in the area. July 4th, 2019 saw the British Royal Marines seize an Iranian ship in Gibraltar it claims was carrying crude oil to Syria, which would violate the EU’s sanctions on Syria. The Grace 1 supertanker was seized at the request of the US, which solicited the detainment of the tanker because of the sanctions imposed by it and the EU. Britain has promised to release the tanker if Iran can prove that there was no breach, or intended breach, of the sanctions on oil shipments to Syria, though the detention of the tanker (which had been carrying over 2 million barrels of Iranian crude) has been extended by 30 days. Iran declared the detainment ‘illegal’ and responded by seizing a British tanker early in July 2019, as well as temporarily holding a second vessel within the Strait. Iran’s Revolutionary Guard declared that the tanker, the Stena Impero, was directed to an Iranian port because it had not complied with international maritime laws and regulations. Though there have not been any reports of injury to the crew, concern remains over the 23 multi-national crew members onboard. On the 24th of July, Iranian President Hassan Rouhani stated his intention to cool tensions with “some European countries” and that he may be willing to release the Stena Impero in exchange for the Grace 1.

Trump is not the first American president to put the country under threat from Iran. The two nations have a long history of disputes, the latest of which being the events in the Strait of Hormuz. Though both countries have declared their intentions to resolve tensions between them, neither is willing to budge on the criteria necessary to start negotiations: Iran wants the US to remove the sanctions on its oil exports as it has crippled the country’s economy, while Trump has stated that he is open to talks but is determined to prevent Iran from assembling nuclear missiles. Tensions reignited between Iran and the US in 2018 when Donald Trump retracted the US from a nuclear agreement which he said provided Iran with too many concessions and which did not diminish the country’s ballistic missile program. Since then, Iran compromised the nuclear deal, signed in 2015, and began stockpiling uranium again, though it has stated that if it wanted to build nuclear weapons, it could have prior to these concerns rising. On July 18th, a US warship cruising the Persian Gulf shot down an Iranian drone which came within 1,000 yards (914m) of the warship and did not back off despite numerous warnings. Iran has since denied losing any of its drone, and speculates that the US may have actually shot its own drone!

The Trade War and the Strait of Hormuz

The Strait has also been a playing field for another political war – the US-China Trade War. Though the trade tensions between America and China have seen some respite after the G-20 Summit in June 2019, the war is far from over, and the Strait of Hormuz continues to play a vital part in it, especially from an American perspective. As US President Donald Trump said himself in a tweet thread, China obtains over 90% of its oil through the Strait, and thus the escalating conflict occurring in the area is detrimental to the Chinese. Trump also questioned why the US should be protecting the area if it no longer benefits from it, considering the fact that the US has recently begun producing much of its own oil. Nevertheless, the Persian Gulf remains a site of contention for numerous nations, including the US.

Though not directly involved, Africa remains open and vulnerable to global political tensions like these, emphasising the need for reliability in times of uncertainty. SA Oil is a leading industry expert equipped with the product, services, and competence to provide industry with tailored-fuel solutions – get in touch for more info.