The US Geological Society has classified Africa as holding immense mineral reserves, including diamonds, platinum and gold – the mining of which contributes hugely to GDP and tax revenue of African countries. But now mines are regularly plagued by illegal mining activities, with cost implications far greater than the loss of ore… 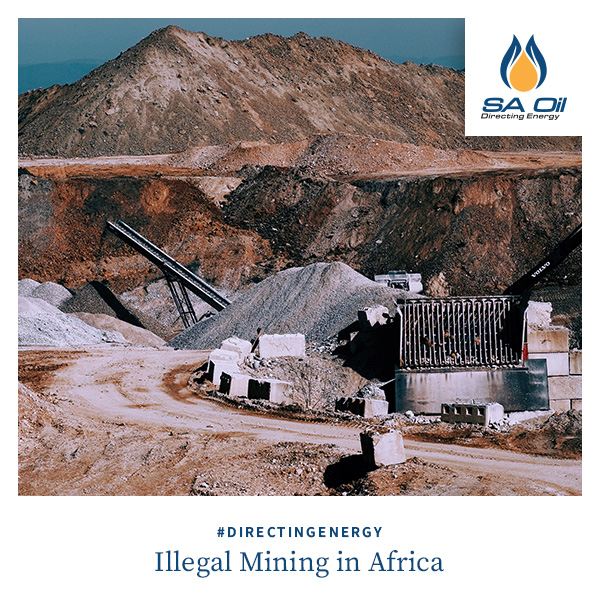 Illegal mining has been on the rise for years and continues to trouble mine operations in many African countries. Illegal mining is the act of gathering or mining various types of ore in open mine operations without the permission of either the mine owners or the government of a country, and can consist of subsistence or artisanal mining (mining to provide for oneself and one’s family) or large-scale, organised crime. As developing countries, African nations present their citizens with limited job and even fewer income-earning opportunities, which can lay the foundation for criminal activities like illegal mining, as it is seen as a relatively simple and quick way of making money. Despite the fact that legal opportunities for artisanal and small-scale mining operations are available – South Africa, for example, recently granted thousands of artisanal miners mining permits – poor governmental structures often make the illegal route more appealing.

It is estimated that about 30,000 people participate in illegal mining in South Africa, searching both abandoned or closed mines and active mines – though abandoned mines are often targeted as the illegal miners can spend days at a time in one location, scouring for whatever ore fragments remain. Given the relatively stable price of gold over the past few years, it is regularly this mineral that is targeted, often entering the global market illegally.

Illegal miners in South Africa are known as the Zama Zamas, who often engage in other illegal activities like human trafficking, illegal weapons, and money laundering. Over the past year (2018-2019), illegal mining has spread to the diamond fields of Kimberley, several chrome deposits in Limpopo, and areas of the Northern Cape. The abandoned mine shafts under Johannesburg have also come under siege in recent months, with illegal miners using explosives that have posed huge risks to the water supply of the city and surrounding areas, infrastructure, and roadways. The City of Johannesburg metropolitan municipality recently closed two roads for twelve months in an attempt to root out the problem, and repair existing damage. The use of explosives is especially worrying as some of the blasting has taken place near gas and fuel pipelines, risking massive explosions that could harm and even cause the death of thousands of people.

The Zama Zamas themselves face immense danger. Unlike many other African mines, those in South Africa stretch far into the earth, with the deepest mine reaching nearly four kilometres underground. Without tools, proper equipment and no regard for safety measures or precautions, many miners become trapped underground and can die or face intense injuries due to collapsing walls and ceilings. Apart from this, being part of an illicit trade has its own complications. Divided into five tiers, the actual Zama Zama miners comprise the first tier and are offered protection and food by the second tier, who are the buyers. They face abuse and violence from those higher up in the tier, as well as turf wars and conflict with other miners.

No End in Sight for Illegal Mining in Zimbabwe

Illegal mining is also a major issue in Zimbabwe, specifically in the northern reaches of the country where gold and diamond deposits were discovered in 2017. Illegal miners have swarmed the area, destroying natural forests and plantations in an attempt to recover even small amounts of gold ore or diamonds. The country has a history of illegal mining, though the activity began with artisanal miners scanning and excavating river bottom sediment for traces of gold. Much like in South Africa, however, the scale of this activity has since grown, and illegal mining now poses a risk to the fauna, flora, and occupants of the region.

Tragedy struck when in February 2019 several illegal miners were caught in the flooding of some underground shafts and tunnels following a burst in a nearby dam wall in Battlefields, which falls 175km west of the country’s capital, Harare. The area is rich in gold deposits and sees frequent visits from the “Makorokoza” – Zimbabwe’s version of the Zama Zamas of South Africa. It was estimated that around 23 illegal miners were caught in the flood, though officials actually recovered around 50 men, none of whom survived the incident.

Illegal mining activities cost the already economically failing country millions every year, with illegal miners contributing nearly 60% of the 33 tonnes of gold produced in the country in 2018.

Concerns Grow for Cobalt Mines in the Congo

Glencore’s Katanga Mining has been central to a largescale illegal mining operation at one of its mines, the Kamoto mine, in the Democratic Republic of Congo. June and July 2019 saw a massive increase in activity in the area, as well as a growing body count. A landslide at the copper and cobalt mine in June saw the death of 43 illegal miners, bringing even more contention to an already tense situation between the mine owners, the artisan miners and the DRC’s policing bodies.

It is estimated that around 2,000 illegal miners frequent the Kamoto mine every day. They enter the mining grounds illegally and use makeshift tools to dig out small chunks of ore to sell. The DRC is one of the poorest African countries, and residents have very little opportunities open to them to create an income and provide for their families, which is why they resort to artisanal mining. When questioned, many have even argued the ‘criminal’ aspect, stating that Katanga Mining already makes hundreds of thousands of dollars from the ore deposits, and that their activities will not affect the company. They have also stated that the land on which Katanga Mining operates belonged to their ancestors, and thus belongs to them.

The illegal miners have been known to become violent, throwing stones and rocks at company vehicles and even employees. The situation has become so tense that, at the beginning of July 2019, the military became involved and started evacuating illegal miners. Many soldiers torched dozens of homes in the area, and though military general John Numbi denies it, a young child and a baby caught inside their homes were injured in the fires. The Congolese government has sworn to end illegal mining following the landslide deaths and proposes formalising the artisanal mining sector.

The Risks and Dangers of Artisanal Mining

Artisanal and illegal miners are usually ill-equipped and may not have any formal mining training, which puts them at risk of injury and death. The dangers of illegal mining cannot be stressed enough, as the miners do not implement safety and precautionary measures to protect themselves. Apart from this, however, they also put the surrounding community at risk, as well as the environment. In cases like Johannesburg, surrounding infrastructure is in a perilous situation as the city was built over old mining tunnels, much of which now house illegal miners and their families permanently, as well as other unscrupulous characters and activities.

In Zimbabwe and the DRC, where the location of the mines is further away from cities, towns or homes, the risk to citizens is slightly less. However, each country suffers the consequences in the form of declining mineral reserves, affected commodity costs, loss of taxes, and increased violence and crime. The enormity of illegal mining makes solving the issue extremely hard, especially where human rights are concerned – as can be seen in the DRC, the actions of the military have been deemed atrocious and many calls are being made for the government to allow subsistence mining. It remains to be seen how each of these countries will tackle this growing problem.

Fuelling the Mining Industry in Africa

The mining sector is crucial to global trade and provides jobs to millions of people across the world. Enabling the mining industry, the energy industry! To keep your mining operation fuelled, speak to the industry experts for tailored fuel solutions– contact us here.