Over time, the composition of fuels has changed drastically. Technological advancements have made it possible to combine petrol with other components, like ethanol, to improve or modify the traits of fuel. Are blended fuels better in the racing world? Find out… 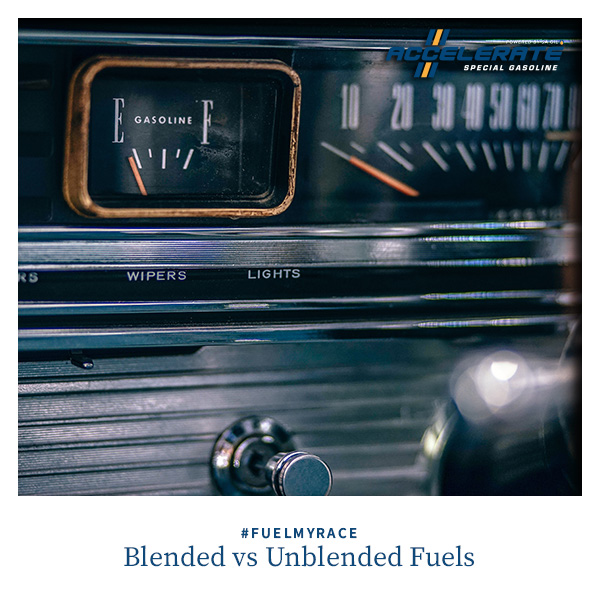 To Blend or Not to Blend?

Throughout the history of the combustion engine, including modern times, what we use to fuel our vehicles (bikes, boats, go-karts – you name it)  has changed, and those in the auto industry have tried almost everything you can think of: hydrogen, moonshine, and even potatoes! Today, fuel is regulated more strictly and any altering or blending done to the makeup of our fuel is often in the aim of lowering CO² emissions, finding cheap ways of boosting fuel capabilities, or lowering the cost of fuel – though this has often come at a different cost altogether. These blended fuels are a mixture of regular petrol and alternative, often ‘green’ fuels, in varying percentages. Take a look at the most common fuel types used today…

These are ‘standard’ fuels – the ones found at petrol and filling stations. In South Africa, we have several different types of pump fuels available – ULP 95, ULP 93 and LRP 95. Each of these fuels contain oxygen, but don’t contain lead. Leaded fuel has been banned in the US and the UK since the late 1990s, though South Africa only implemented the regulation in 2006. The number denomination in each of these fuels – 93, 95 – refer to the octane rating of the fuel. For standard road vehicles, these octane ratings don’t necessarily make a substantial difference, but for high performance engines, octane rating matters. This is why racers who use pump fuel can be at a disadvantage if their opponents make use of proper racing fuel with a higher octane rating!

Other disadvantages of using pump fuels for racing include:

Ethanol, or ethyl alcohol, is a sugar distillate extracted from produce like corn, sugarcane, wheat and other crops. Combining ethanol with petrol has been commonplace in many countries around the world, namely the US and the UK whose metropolitan areas create phenomenal amounts of air pollution, as ethanol helps reduce CO² emissions. Though rumours of using blended fuels in South Africa surfaced around 2015, nothing was ever implemented despite growing pressure placed on the South African government to conform to global emissions standards.

There are various ethanol-petrol blend percentages ranging from E10 right up to E85, though not every vehicle is able to run on E85 petrol. This blend comprises up to 85% ethanol and as low as 15% petrol – a mix standard engines weren’t built to endure. A flexible-fuel vehicle (FFV) is a vehicle whose internal combustion engine is capable of using a mixture of fuels, though some are able to run purely on ethanol. Countries that use E85 fuel and have a colder climate include the small percentage of petrol in the fuel mix to ensure that engines are able to start in cold weather.

Ethanol blended fuels have their own set of disadvantages, including:

Racing fuels are usually considerably different to standard pump fuels and can be specially formulated for high performance engines. This means that they may contain additives that standard fuels don’t, or that ingredients found in pump fuels are removed from racing fuels – the composition is related to performance, an important factor in the racing world. A good racing fuel can shave seconds off your lap time or get you that much further in a Le Mans-style race – a literal case of ‘what you put in is what you get out’! What makes a racing fuel is thus very important, and a good racer knows that the fuel you choose can mean the difference between a podium finish and being stuck in the pits!

Consider the benefits of a pure, unblended racing fuel:

Whether racing is a career or a hobby, it is often a costly sport to engage in. Investing in good quality fuel can save you thousands in the long run, and will boost your performance, to boot! ACCELERATE Special Gasoline is a 102 octane, specially formulated fuel that does not contain ethanol, oxygen or lead – just vuma! Fuel your race with our pure, premium fuel…