The Fuel That Got Man to the Moon

Nearly 50 years ago, on the morning of the 20th of July 1969, the National Aeronautics and Space Administration (NASA) sent Saturn V to the moon during the Apollo 11 spaceflight, making history. Find out how the mission was possible… 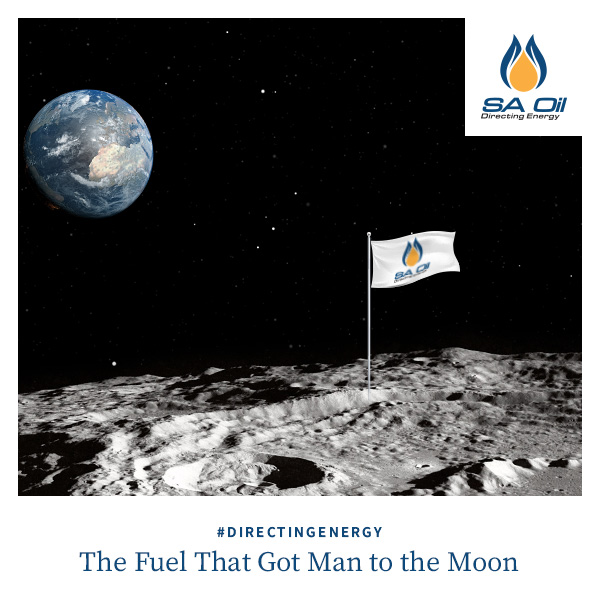 50 Years Since Man’s First Steps on the Moon

During the 1960s and 1970s NASA began the Apollo space program, a series of space missions which saw the launch of several rockets to the moon and the safe landing of numerous astronauts – the most prominent of which was the first ever moon landing. The first manned space shuttle that safely reached the moon was the Saturn V, piloted by Michael Collins with lunar module pilot Buzz Aldrin and commander Neil Armstrong, three names humanity will never forget. Armstrong’s first words when setting foot on the moon are iconic…

The 1960s were a turbulent time, especially in America which was facing the repercussions of losing the Vietnam War, the Civil Rights Movement, and the assassination of President JF Kennedy. So why send man to the moon? The Apollo missions were largely motivated by the Space Race, a competition (of sorts) between the US and Russia, the winner of which would be the nation to send man to space, and then man to the moon, first. The Space Race was part of a much bigger, ongoing conflict between the US and the then USSR – the Cold War.

The competition between the two nations began in 1955, though the first successful launch of a spacecraft only took place two years later, in 1957, when the USSR launched Sputnik 1 into orbit. The USSR took the lead in the Space Race again when, three years later, the sent the first man into space, Yuri Gagarin, and then the first woman, Valentina Tereshkova, into space in 1963. Not only did this portray the USSR as having superior technology, it also revealed the nation’s ability to send nuclear weapons over great distances – to another country, if need be. This element formed a large part of the Cold War, which saw both countries on the brink of a ‘hot’ war for over forty years. Needing no further motivation, the US began their Apollo project, eventually becoming the first country to successfully send man to the moon.

Before rockets could carry dogs, monkeys or men to the moon, they were unmanned and couldn’t even reach space. Robert H. Goddard is a name many don’t know, unlike Neil Armstrong or Buzz Aldrin, which became and remained household names long after their walk on the moon. Goddard was an American engine, professor, physicist, and inventor who built the first ever liquid-fuelled rocket. The first successful launch took place in March 1926 – nearly half a century before the USSR began leading the Space Race. In total, Goddard launched 34 rockets between 1926 and 1941, with rockets reaching as high as 2.6km and as fast as 885km/h. He is credited as the man who started the Space Age, and it was thanks to his technology that space exploration is possible.

The Launch of Saturn V

The Saturn V was used in the Apollo spaceflight project between 1967 and 1973 and used approximately 83 engines during its career. It is a three-stage liquid-propellant super heavy-lift launch vehicle (try say that fast three times!) developed for the Apollo programme, human exploration of space and the moon, and was also used to launch Skylab, the first American space station. The rocket launched a total of 13 times from the Kennedy Space Centre in Florida, USA, experienced no crew or load losses, and carried a total of 24 astronauts to the moon, three of which made the journey twice! To date, the Saturn V remains the tallest, heaviest and most powerful rocket to ever be operational.

The Saturn V was designed to operate at three stages. Each of these stages made use of different fuels, though all of them used liquid oxygen as an oxidiser. The other fuels used consist of liquid hydrogen and RP-1, or rocket fuel. What many people don’t realise is that ‘rocket fuel’ is simply an extremely refined form of kerosene. The various fuels used in the rocket were ignited at different stages of the launch and journey into space – an important factor when considering the different environments each of these fuels need in order to be useable.

Liquid Oxygen, or LOX requires intensely cold storage facilities to remain in its liquid state – hard to achieve when being held within a rocket! In order to use the fuel, engineers had to ensure the fuel was loaded as close to the launch as possible to avoid the fuel becoming too warm. However, the fuel provides an important benefit: engines using this fuel can be throttled and restarted, an important factor during a trip to the moon.

Liquid Hydrogen requires the same treatment and must remain below 33K to retain its liquid state – which is -240°C.

Rocket Fuel or RP-1 does not require cooling and can be used when at room temperature – or in this case, rocket temperature.

Enormous amounts of these fuels were used both during the Apollo project and during Saturn V’s flight to the moon. Each stage of the spacecraft had to carry sufficient fuel to launch, achieve adequate thrust, reach space and the moon, and then complete the process in reverse, though many of the rocket’s compartments were discarded during the launch and flight. The biggest engines on the rocket, five F-1 engines, provided a combined thrust of 3,401,942kg. These engines fell into stage one and burned all their fuel in less than two and a half minutes!

Fuel That’s Out of this World

Hydrocarbon fuels have accelerated many technological advancements and is ultimately what got man to the moon. For fuel solutions that will have your business operations reaching new heights, contact us!