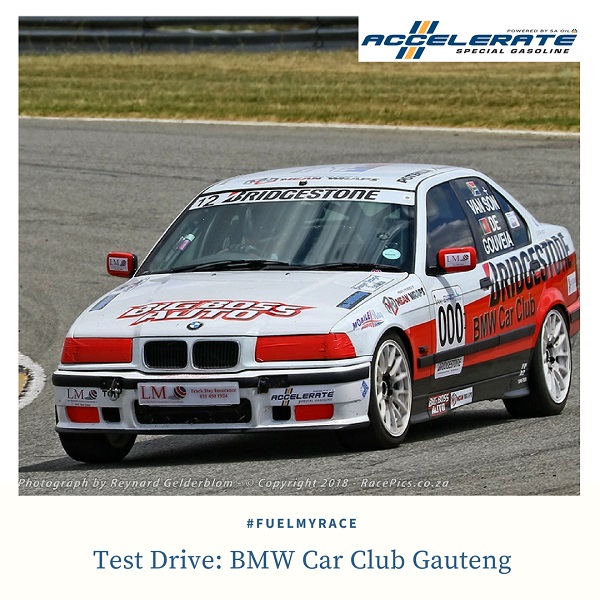 “It’s not often that you see a car club with its own race car; rarer still to see two of them branded in sponsor and partner colours. Such is the fortune of our club that we have the partners, sponsors and members that we do that make it possible.

In 2017, we built the race car ‘Manny’ – named in honour of a previous committee member who had donated an incomplete car to get our motor racing project started. Long story short: to make way for a new car, we sold ‘Manny’ to five of our committee members to share. For our new project, our eyes were on an E46 325i Touring, with a view to making it a race car that could take four people around the track, have enough space to cart all the implements we need, and still be driven on the road as a regular car. Sounds impossible, but we made it work! For various reasons, it was named ‘Sandbag the Track Wagon’.

Recently, both ‘Manny’ and ‘Sandbag’ were in action at the Bridgestone BMW CCG Phakisa Track Weekend. They were on track in every possible session, covering almost 800km between them, performing brilliantly, and even racing against each other in the two heats of the Bridgestone BMW Club Racing Series – with ‘Sandbag’ being driven by Michael Broom and ‘Manny’ by Colin Van Son. The two cars were bumper to bumper both races, thrilling the fans that came along to watch, and showing us that, when it comes to these two, there’s nothing in it…race one to ‘Sandbag’, and race two to ‘Manny’!

Noticeable Improvement in Performance and Economy

What amazed us most about both cars, their resilience and reliability, with ‘Manny’ only requiring a rear brake pad change (the pads that have been on the car for the past two years), and ‘Sandbag’ only needing a water top-up on the Saturday morning. Even the cars’ set-up, courtesy of Shane Grobler, meant we didn’t need to change or rotate the Bridgestone tyres.

The only real expense should have been fuel; however, we were given the newly launched ACCELERATE Special Gasoline 102 to trial, courtesy of independent energy company SA Oil. We noticed an improvement in both performance and economy, probably due to the fact that this new high-octane fuel contains no lead, no oxygen and no ethanol – none of the usual tricks to increase octane rating here; ACCELERATE Special Gasoline is a pure performance fuel!

‘Manny’ and ‘Sandbag’ have proven that building BMW race cars can be relatively inexpensive and, provided you keep them fairly standard, they’ll remain reliable and fun to drive. After all, the point of taking part in a track day or race series is to have fun – and when all you need to do between events is wash the car and change the oil, that’s when racing stays fun!”

The BMW Car Club Gauteng is a founding member of BMW Clubs Africa, the umbrella organisation for BMW clubs in Africa, and is proud to be recognised as an Official BMW Club. The club’s events are designed to offer something for every type of BMW owner or driver, in a safe controlled environment.