How Petroleum Saved the Whale

Whaling for profit has been banned since 1986 but whale oil was once part of international trade, lining the pockets of anyone brave or rich enough to hunt these mighty creatures. The discovery and use of crude oils threw whales a lifeline – find out how… 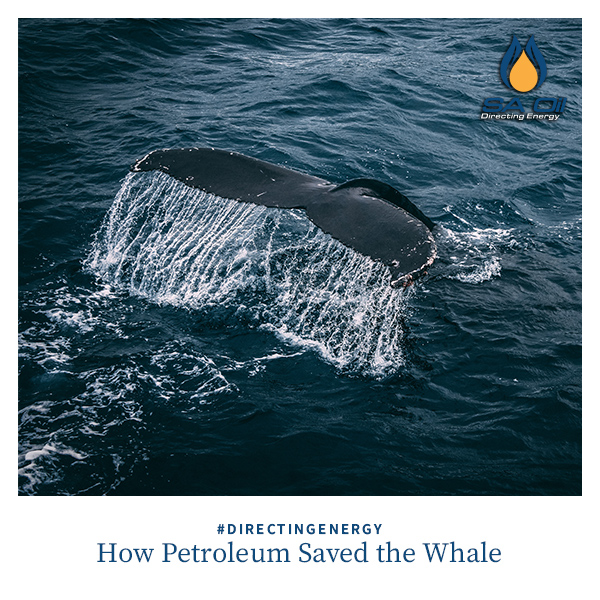 Whaling, or the hunting and killing of whales, is centuries old. At first, these enormous marine animals were hunted and slain to sate the need for sustenance and warmth – whale meat and blubber was used for food due to its high energy and vitamin count, but every part of the animal was put to use, lighting lamps and even being used to make tools. However, the most sought-after material obtainable from whales is their oil, and the sperm whale was especially targeted for this.

Whaling – The Most Dangerous Hunt

Commercial whaling was conducted as early as 1000 A.D. by an ethnic group known as the Basques. Other countries soon followed suit, but early methods of hunting whales were primitive – often, hunters would row or sail out on small vessels with nothing but harpoons to kill the animal. Even the use of larger ships posed a great threat to the hunters, who risked their vessels being destroyed, having crewmembers fall overboard, and even faced the risk of contracting dangerous diseases like yellow fever and malaria when travelling to different ports. Despite this, crew on whaleships kept a sharp lookout every day, spending hours at their mastheads, waiting for signs of spout, fluke or fin. Whaling changed when Norwegian whaler Svend Foyn launched the first steam-powered whaling ship in 1863, followed soon by the harpoon cannon, which was rigged with explosives and effected a quicker death for the whales.

Whale oil, also known as train oil, is obtained from the blubber of whales – primarily baleen whales. Their oil comprised triglycerides, whereas toothed whales’ oil contained wax esters. Bowhead and right whales were often targeted due to their docile natures and slow movement, as well as the fact that they yield high-quality oil and whalebone. To obtain the oil, hunters would remove strips of blubber from the whale – this is known as flensing – and then boil them in a process known as ‘trying out.’ The oil had a number of useful applications:

Sperm whales were sought after because they carried more oil than other whale species – their large head contains a gland which produces their oil known as spermaceti. They also posed less risk to hunters, who struggled to keep up with the blue, sei and fin whales and who faced the risk of the larger whales destroying their ships. Unlike other whale oils, sperm oil has a very faint odour, and a different composition: it is a liquid wax containing a small portion of triglycerides, some fatty acids and fatty alcohols. It is also a natural antioxidant and heat-transfer agent. During the 18th and 19th centuries, this oil was renowned for its bright, odourless flame and its greater lubricant properties.

The classic story of Moby Dick is based on true events! In 1820 a whaling ship and its crew had the unfortunate luck of picking a fight they could not win: coming across a pod of sperm whales, the crew began targeting some of the calves, hoping to pick off the smaller whales when a giant, albino sperm whale rose to the surface of the water and began battering their ship. Reports claim the whale was over 25m long, and that the behemoth creature thrashed against the ship with its head and tail, returning multiple times with harder attacks until the crew was forced to abandon ship and were cast out into the ocean, leagues away from any known land. This encounter spurred inspiration in author Herman Melville, who interviewed the first mate – and Moby Dick was born!

By 1845, whale oil production was at an all-time high and a gallon (approximately 3 litres) was selling for $1.50 – about $200 today (approximately R2900). But as the whale oil industry soared, whale numbers took a tremendous dip and some species were driven almost to the point of extinction. The right whale was hunted and killed at a rate of about 15,000 per year and numbers eventually decreased so much that whalers had to obtain their oil from other species. It was around this time, in the mid-1800s, that kerosene gained ground in the market. Known then as “coal oil,” it was cheap, easy to produce and smelled better when burnt than animal-based fuels. It also did not spoil as whale oil did. The year 1860 saw about 30 kerosene plants come into production in the United States. The whale oil industry declined as petroleum products like kerosene, as well as camphene and burning fluid, became more popular. By 1895 even the demand for sperm whale oil had decreased, resulting in a price drop to 40c per gallon versus the growing demand for refined petroleum, which sold at around 7c to the gallon.

It was as late as 1946 that whaling started being regulated. Agreements were signed which allowed for the monitoring of whaling practices in an attempt to allow whale species to recuperate from the onslaught of the previous century. In 1986, the International Whaling Commission was created to prevent over-hunting as well as to standardise the interaction between humans and whales. Some countries have absconded from the agreement, while others created their own policies regarding the issue. Some countries which still engage in whaling are Japan, Norway and Iceland.

Whaling in South Africa was once a thriving industry, with hubs like Durban and Plettenberg Bay supplying whale oil and other whale products to the local and overseas markets. Hunting the whales that migrated up the coast between March and September lasted in Durban from 1907 to 1975 and was quite a lucrative business. However, complications like numerous, ongoing complaints of smell by residents living on the Bluff and declining whale numbers hit the whaling companies in the region, though it was conservation efforts and the rising cost of oil which eventually sent the companies belly up – these companies used huge amounts of fuel oil for daily operations, so the fuel price increase slimmed their already thinning profit margins to the bone. Whaling organisations in Plettenberg Bay had suffered far earlier, though the slipway that was used to pull the whales ashore can still be seen from the Beacon Isle hotel which replaced the whaling station.

Since their widespread adoption in the late 1800s, petroleum products like kerosene, HFO and diesel have proved their effectiveness and cost-efficiency and remain the fuels of choice across industries and applications. It has been argued that their introduction to the industry even helped pull the whales back from the brink of extinction! The whale population that frequents South Africa’s oceans have replenished and now are a great treat for tourists – from June to November, a variety of species can be seen, including the southern right whale and the humpback whale, as the coast teems with large pods. Whale watching sites extend around the country’s coastline, from Doringbaai on the West Coast right up to St Lucia on the East Coast. Those in the Western Cape can enjoy the southern right whale’s temporary stay in the region as they frolic, court and nurse their young. KwaZulu-Natal also gets glimpses of these enormous mammals, especially during the famous Sardine Run, which takes places between May and July each year. Petroleum fuels – from jet fuel to petrol and diesel – facilitate this industry, powering thousands of tourists to whale-watching destinations in South Africa each year.

SA Oil specialises in industrial fuels for applications in mining, manufacturing, marine and agriculture. For more information on our products and services, get in touch…