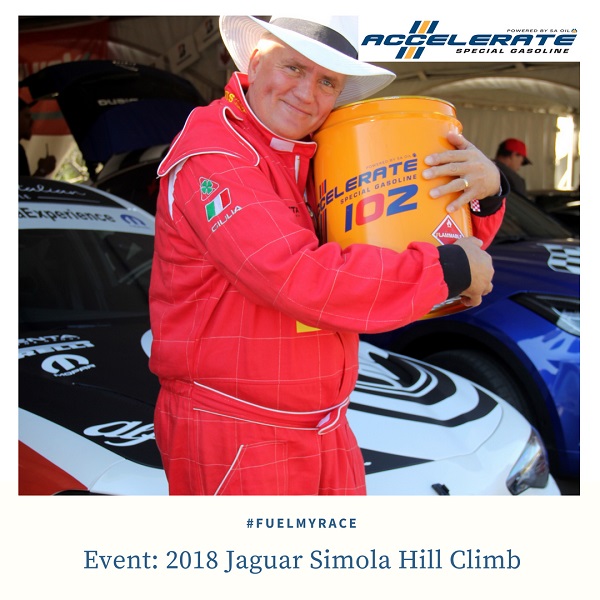 This year’s edition of the epic race attracted a record-breaking 17 000 spectators, all vying to get the best view of the action, with records being set in each of the motorsport event’s three categories – a time of 36.428 seconds by Andre Bezuidenout in the Single Seaters and Sportscars One-Lap Class Finals, a 39.463 second record for the Modified Saloon Cars Class Final by Wilhelm Baard, and 44. 892 seconds for Reghard Roets in the Road-Going Saloons Cars and Supercars category.

And a Great Outing for the Alfas!

Explains Les Bygate, Sales Manager: Penta Montana, this pure performance fuel is what gave the team the edge. “Driving the vehicles as I do on a day-to-day basis, I could really feel the difference – the acceleration and responsiveness of the vehicle really changed when we ran ACCELERATE Special Gasoline. The most astounding thing was that the engine management completely agreed with the product – the Alfa has a very sensitive and accurate management system, and it took the fuel without a hiccup.”

With no lead, no oxygen and no ethanol, and with a 102-octane rating, ACCELERATE Special Gasoline provides the energy and power vehicles need for peak performance. But you don’t have to be a racing driver to feel the benefits: “I am so impressed with the product, I even recommended it to a few of my Guilia QV clients,” says Bygate. “We still have some fuel in the cars and they’re running smoothly and full of power”.

But don’t take our word for it, try it for yourself!